Circular agriculture is a term used to describe agricultural practices aimed at minimizing inputs, chemical fertilizers, harmful substances, and waste. It is also focused on reusing residual products, both within supply chains and to other supply chains, such as the use of algae.

Algae are used for a wide range of applications. Human consumption, cosmetics, biofuel, animal feed, and fertilizer are areas where algae are currently being applied. Algae used in animal feed is a source of protein, fatty acids, minerals, vitamins, fibre, and antioxidants. And with several companies using algae as supplements or additives for animal feed (e.g. Phycom, Skretting, Veramaris), it is clear the potential of algae is substantial. Therefore, Larive International is researching innovative ways to not only use algae in a sustainable manner but also produce it sustainably.

From obstacle to opportunity: using residual algae from fish farming

Together with Wageningen University and Viqon Water Solutions, Larive International has researched the utility of residual algae from aquaculture production. The main focus of the study was on valorizing residual algae, which spontaneously grows during fish farming in tropical climates such as Tanzania, where this study was performed.

After assessing the current algae production in the Big Fish farm in Tanzania, it was found there were several species of microalgae together, contaminated with some waste from fish and feed. The production was estimated at 75 ton of algae per hectare per year, half as much as the production of fish, which is substantial. As the algae grow without the use of supplemental resources, the production costs are zero.

Two separation techniques were used to separate the algae from the water. Sedimentation is cheap, but a slow method. Centrifugation is more efficient, but also more costly. Flocculants could also be used to speed up the sedimentation process but would require extra research to see if the end-product is still suitable to use as animal feed. The chemical composition of the algae collected from the water is as follows:

While assessing the potential applications of the types of algae recovered from the fishponds, the team decided human consumption was out of the question, due to the production method where both algae and fish are produced in the same body of water.  However, with this diverse range of opportunities, it was worth diving deeper into the possibility of using algae as an input for animal feed.

Algae are a sustainable protein source that can replace soy in animal feed. Soy is often imported and has a high demand for resources, particularly energy, water, chemicals and soil. Another major problem associated with soy production is deforestation. Algae, on the other hand, requires minimal resources or processing and has high protein levels.

Within our particular scenario, algae production in combination with aquaculture, several issues arose, including lack of sterility and inconsistency in quality. However, it is worth finding out how to overcome these issues, as the potential for algae is significant in animal feed production.

Algae can be used in livestock feed or aquafeed, replacing less sustainable plant-based proteins such as soy. Although the studied field of production is still in its first stages, our research has shown great potential in improving circularity and sustainability in agriculture and aquaculture through the use of this green gold.

The potential of circular aquaculture

Innovative ideas are required to constantly improve supply chains. Using residuals from aquaculture to feed other animals, is an excellent example of circular agriculture. Although this specific example of using algae for feed is still in its infancy, the potential for alternative feed ingredients is promising. With Dutch technology and knowledge, this process can be accelerated and Larive International can help you with implementing your innovations with our international network of professionals. Sharing ideas and innovative solutions allow for agriculture and aquaculture to evolve and thrive sustainably. 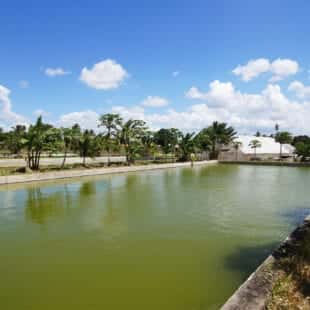 Algae can be used in livestock feed or aquafeed, replacing less sustainable plant-based proteins such as soy.

My experiences as a YEP Aquaculture Expert in Kenya