Bangladesh’s economic performance, over the last decade, has garnered accolades from the international community, particularly from the multilateral development agencies like the World Bank, which has portrayed Bangladesh as an exemplary case for economic development. From being termed a ‘basket case’, espoused by then US Secretary of State, Henry Kissinger in early 1970s; we have come quite far. Forging ahead of Pakistan and growing neck-to-neck with India in economic terms have both given the country renewed hope and confidence. Bangladesh’s per capita income has recently eclipsed that of India’s during the pandemic.

Bangladesh’s economy has performed quite robustly, even during the pandemic, with the IMF projecting a GDP growth rate of 4.4% in 2020, followed by a steeper rise of 8% in 2022. Bangladesh has already met all the criteria for graduating as a middle-income nation and is on course to becoming one in 2024. The journey from a ‘basket case’ to the development miracle has not been simple and is fraught with seemingly insurmountable hurdles. But how did Bangladesh manage to outperform many of its peers?

Experts have theorized the rationale for Bangladesh’s spectacular economic performance over the last couple of decades. Demographic dividend has a big role to play, as 62% of the population remain below the age of 35 years, augmented by a large population (167 million) and high population density (1,200 people/Sq km). A rising middle class growing at 10% per annum is expected to reach 34 million by 2025, providing the bedrock for rising consumer demand. High mobile (98%) and internet penetration (62%) have also been contributing to the bulging digital economy. Remittance earnings, a key export earner, contributed 6% to GDP, and brought in a record USD 18 billion in FY19-20.

But, what sets apart Bangladesh from its regional neighbor is the level of female participation in the workforce. In Bangladesh, 38% of the female working population is actively engaged in the workforce, while the comparable figure is just 20% and 22% for India and Pakistan. Bangladesh’s apparel sector -the second largest player after China- and the largest contributor to the nation’s export basket (84%), have a heavy reliance on female workers, as females constitute 65% of the 4.1 million apparel workforce. Economically empowered women presumably have had a major boost on the country’s inclusive growth, as income generating females often prioritize on making investment on their family’s healthcare and education as opposed to spending on other household items. These trickle down economics have resulted in Bangladesh’s superior performance in UN’s Human Development Index (HDI) ranking, compared to regional peers.

While Bangladesh finds itself in a favorable position, a looming challenge lurks around in the form of the second wave of the coronavirus. The country is also experiencing a geopolitical shift with the growing divergence between the US and China.

The world is still struggling to contain the spread of the virus, and coupled with the US-China trade row, protectionist measures from other countries have contributed to stymied trade and investment activities.

The pandemic has already laid bare the perils of relying on a single source for raw materials and manufactured goods. Although China has recovered well from the pandemic, many large multinationals have accelerated the process of shifting manufacturing operations from China to other competing location, as part of their ‘China plus’ sourcing strategy.

Regional economic rival, Japan, has earmarked a fund of USD 2.2 billion for supporting Japanese companies looking to shift manufacturing plants from China. The other developed economies, across Europe and North America, have been informally encouraging their companies to diversify their sourcing and investment destinations. This is a dream scenario for competing trade and investment destinations such as India, Myanmar, Cambodia, Bangladesh and Vietnam.

How can Bangladesh benefit from the once in a generation strategic shift? The country, unfortunately, hasn’t been dealt a strong hand, due to inadequate infrastructure (albeit improving), red-tapeism and weak nation branding. These have been reflected in Bangladesh’s poor show in the Ease of Doing Business ranking, as the country secured a modest 168th position, against stronger performances from India (68th) and Vietnam (70th). However, the government is cognizant of the systemic shortcomings and is spearheading reforms through Bangladesh Investment Development Authority (BIDA), with a view to securing a double digit ranking within the next 4-5 years.

BIDA has recently launched the ‘One-stop-solution’ platform and is centrally offering 21 market entry facilities for incoming investors. This initiative is expected to gain further traction in the coming months, as all relevant government agencies establish more synergistic relationships amongst themselves, leading to a possible drop in the market entry lead time.  While the government policies are investor friendly, Bangladesh is suffering from an image crisis, especially among potential investors.

How LightCastle is helping improve the Investment climate?

Investment remains a crucial component for boosting Bangladesh’s economy and we’re excited to be playing a minuscule role in charting Bangladesh’s course as an investment destination. Our macroeconomic and sector specific publications, geared towards potential investors, have aimed to delineate the rationale for investing in Bangladesh. Last year, LightCastle had launched the ‘Bangladesh Doing Business Blueprint 2019-20’, a one-stop guide for international investors planning on entering Bangladesh. Our strategic partnership with Larive International is aimed at positioning Bangladesh as an attractive investment destination and supporting incoming investors with a seamless market entry process.

In the coming months, we have a number of large nationwide events lined up to position Bangladesh as an investment destination. We look forward to collaborating with all relevant stakeholders in helping transform Bangladesh into a developed economy in the coming years. 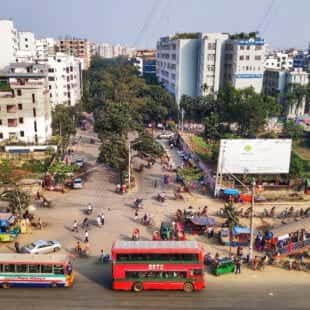 We look forward to collaborating with all relevant stakeholders in helping transform Bangladesh into a developed economy in the coming years.

An introduction to Bangladesh

My experiences as a Junior Project Manager at Larive International