Last week’s four-day Fifth Plenary Session in Beijing saw China’s leaders meet to determine the blueprint for China’s policies over the next five years. Although the full details won’t be released in March next year, below are 13 highlights from the communique published following the session:

1. Lowering GDP Growth to a Switzerland a Year

Beijing has lowered its GDP growth targets to 6.5% a year until 2020 in hope of doubling 2010 GDP and per capita income by 2020. This is more sustainable than the freakish growth of previous years, particularly as the economy has matured and much of the rest of the world is still volatile. In saying that, it is still adding the equivalent of Switzerland’s economy every year, and in absolute dollar terms, that growth is higher than the 10.3% in 2010.
We may be reading something wrong, but the goal to “double 2010 GDP by 2020” doesn’t seem like much of a stretch. Using the World Bank’s measures, 2010 GDP clocked in at $6,040 billion and 2015’s figure is expected to be over $11,000 billion, meaning it would take less than two years at 6.5% growth to reach the target.
Industries affected: All.

One of the drivers of China’s economic growth has been urbanisation. With around 54% of China’s 1.35 billion people living in cities, there is still plenty of room for growth. Urban consumers earn over three times more than their rural equivalents and are much more likely to buy products and services, and build innovative businesses. The wording in the communique is quite dubious: “urbanization ratio calculated based on the number of registered residents will also rise at a faster pace,” which may not mean increased rates of people moving to cities, but a loosening of the Hukou policies, providing basic rights to migrant workers who are currently treated like second-rate citizens. Whichever it is, it will be good for China.
Industries affected: Consumer products and services, tourism, construction.

One of the most talked about changes from the plan is the ending of one-child policy. We believe this is more symbolic than anything else. There have been a number of policy changes over recent years making it easier to have more children, but the increase in birth rates has been much lower than expected. It has become socially acceptable to have one child and the cost of raising additional costs is prohibitive to many. If we look to Hong Kong, which has no such policy, birth rates are actually lower than Mainland China. Child-related products and services are already some of the fastest growing categories in China, but don’t go building extra infant formula factories just yet.
Industries affected: Baby & toddler products, tourism, education.

4. Opening Up to the World

China has been steadily opening up since 1979, however this 5-year plan specifically states it will do more. This includes providing clearer rules that apply to foreign investment. It will also adopt a “negative list” which clearly states sectors and businesses that are off limits to foreign investment, which will provide more certainty. We can expect to see the continued drive for more free trade agreements and projects such as the Belt and Road Initiative.
Nevertheless, there have been a number of trends that are contradictory to China’s mandate of opening up. Over recentyears there has been a increase in anti-foreign brand sentiment driven by state policy and media. The Internet has also become more closed than before, although Mark Zuckerberg has been posturing the Chinese and allow a censored version of Facebook. In short, we expect it to become more open in some ways, and more closed in others.
Industries affected: All, particularly those making investments into China.

Luxury brands who target gifting and Government officials are likely to be disappointed that there is no sign of the anti-corruption drive abating in China. Luxury brands need to adapt to target everyday consumers with less brash and mainstream products that Chinese are increasingly demanding. Golfing and gluttony industries were singled out as additions to the no-go list for ambitious bureaucrats.
Industries affected: Luxury, golf, banquet restaurants

Companies such as Alibaba, Tencent and Huawei have pioneered innovation to create world-leading technologies from China. We’ve already seen Chinese brands make an impact in some industries such as smartphones, where Chinese brands accounted for less than 30% of the domestic market in 2011, but now hold more than 80%. 20% of all home appliances sold globally are Chinese brands. China wants to see more of it to push China’s economy up the value chain, and is encouraging systems that nurture innovation and see better allocation of resources including labour, capital, land, technology and management.
Industries affected: All, but those specified are political theories, science, technology and culture.

7. Integration Between the Internet and Traditional Industries

China’s online giants are leading O2O integration with Alibaba buying a host of offline assets to integrate with its online ones, and Tencent & Baidu teaming up with Wanda Group to create smart malls. The Government wants to grow this trend integrating the Internet of Things into a lot more things, which will drive innovation, efficiencies and provide a valuable source of big data.
Industries Affected: All, particularly retail, technology, entertainment and transport.

With a country as large and varied as China, one of the most reliable ways to understand the population is through big data. Any Internet company operating in China already needs to allow the Government access to its data, but expect to see a more concerted effort to interpret and harness those insights. In late 2013, we saw early signs of this, with cooperation between the Government and companies such as Baidu, Alibaba and China Unicom to assist with data collection for Chinese statistics. We are hoping that the reference to the ‘sharing economy’ will mean more of this data will be publicly available, providing valuable insights to businesses selling in China.
Industries affected: Any Internet company or organisation with a lot of data. All businesses can benefit if data publicly available.

Five years ago, most people in China wanted a cushy Government job. The most desirable spouse was a public servant. The combination of the anti-corruption drive and pin-up entrepreneurs such as Jack Ma has turned the tides, with many of China’s youngest and smartest wanting to start their own business. The Government is pinning their hopes on these types to help drive China up the value chain. Hopefully this is backed up with policies such as easier finance for smaller businesses. At the other end of the spectrum, State Owned Enterprises will be retooled, with less state interventions. Expect consolidation, with fewer, but larger SOEs and potentially outside shareholders. More efficient SOEs and entrepreneurs will provide further competition to China’s already fiercely competitive market.
Industries affected: All.

10. Education for those Who Need it Most

Education has been a key pillar of Chinese society since Confucius and this year’s Five Year Plan continues this in earnest, with the Government striving to improve the quality of education. Core to this plan is enabling China’s poor to attend high school for free, and providing them access to vocational secondary schools through subsidised tuition. This is unlikely to have a significant impact on students studying abroad, however as the general standard of education rises, more students may look to overseas education as a point of difference.
Industries affected: Education in the short term, all industries in the long run.

Health is the top concern across most demographics in China, reflected in a Xinhuanet online poll prior to the Five Year Plan which saw 72.6% of Chinese caring about health. Health was a key component of the 12th Five Year Plan, which saw basic medical insurance rolled out to the majority of the population. The elderly stand to benefit from the latest policy which will see old-age insurance provided to the full population. The critical illness insurance system will also be implemented at full scale. A lot of the increased expenditure on health equipment is likely to be purchasing low-priced medical gear which is dominated by local manufacturers, however the overall trend of improving health standards is seeing increasing opportunities for higher-end foreign medical equipment. Demand for pharmaceutical products will continue to rise, and with it, new innovations to help reduce fakes in circulation.
Industries affected: Health services, medical equipment, pharmaceuticals, old-age care.

One of the main health concerns in China is related to food safety, which is dragged down by an inefficient and often rudimentary food supply chain domestically. Modern China was built on the back of small peasants farming plots, but Beijing is increasingly introducing technology, corporatisation and transparent supply chains to increase safe food produced in China, which it hopes will both improve the self-sufficiency ratios and perceptions about locally produced food and beverage.
Industries affected: Agriculture, food & beverage, technology.

A Xinhuanet online poll into expectations for the next five years found the environment to be the most important subject for Chinese, with 73.8% caring about it. China’s horrendous environment remains the elephant in the room, although increased focus since 2013 has seen some green shoots of hope. In 2014, emissions of five key heavy metal pollutants (lead, mercury, cadmium, chromium and arsenic) dropped by 20% from 2007 levels. Air pollution improved slightly in 71 of the 74 cities recorded last year, but water and soil pollution continues to get worse. Beijing still has a lot of work to do, and we have been promised developments that will be green and sustainable, a further reduction in coal consumption and a ‘more exacting environmental protection system.’
Industries affected: Construction, manufacturing, energy, technology and transport.

China has had an enviable track record of delivering on what it promises in each Five Year Plan, which is why their direction and policies are significant for everyone doing business in China. This Five Year Plan is particularly important given China’s slowing economy and the lead-up to the 100-year anniversary of the founding of the Communist Party of China in 2021. We will be following its progress closely, so stay tuned. 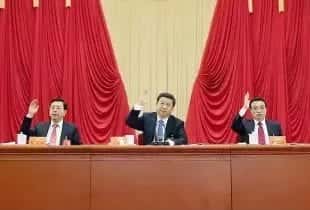 Successful webinar on collaboration with Education Institutes in India –...