Shaping the future of mobility in Bangladesh

Multiple factors will define Bangladesh’s automotive market growth over the next decade. In the most likely scenario, Larive group partners LightCastle projects industry annual growth to reach 34K units in 2025, representing an 11.2% CAGR. 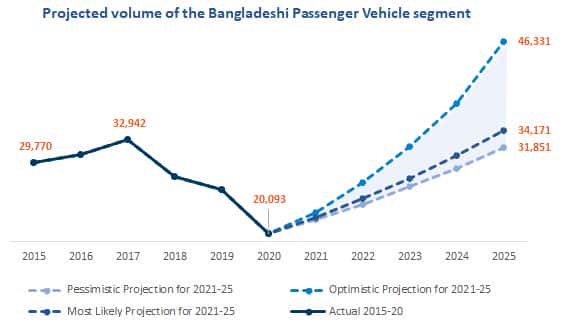 Some of the most prominent factors identified include:

Procurement by the public sector is a major portion of annual sales for many of the brands that participated in the interview. Whether it is a procurement for government projects, for the transport of government officials, or through various low-interest loan facilities extended to (high-level) government officials, procurement by and for the public sector contributes greatly to the annual sales of the automobile industry. The draft automobile policy’s intention to limit government procurement to only locally-produced vehicles can be a shot in the arm for assemblers, while an expansion of eligibility for the special low-interest loans to include mid-level government employees can benefit the overall automobile sector.

Due to the country’s consistent economic growth, disposable incomes are on the rise and more and more families are climbing the economic ladder. And, as economic development spreads beyond the metropolitan cities such as Dhaka and Chittagong, demand for cars in the divisional cities will increase rapidly.

The Bangladeshi automobile segment is heavily impacted by the exorbitant import duties placed on imported vehicles, both reconditioned and brand new. On the other hand, a heavy reduction in import duties for the import of semi-knocked down (SKD) and completely-knocked down (CKD) components, brought forth by the automobile development policy, can significantly boost the prospects of the local automobile industry.

The cost per unit of electricity can emerge as a major dealbreaker, especially as electric vehicles (EVs) take hold in the market. The automotive development policy already alludes to a future dominated by EVs and environmental policies and tax breaks are likely to incentivize the purchase of EVs going forward. But before purchasing EVs, consumers are likely to weigh the variable costs associated with operating an EV. If the price of electricity continues to rise as it has been consistently for the last several years, the cost per kilometre for operating an EV (which is now estimated to be as low as half the cost as when operating fossil fuel-based cars) will go up and will act as a disincentive for buyers to upgrade to EVs from fossil fuel-based vehicles. This may jeopardize the government’s target of having at least 15% of all registered vehicles be powered by “environment-friendly electricity” by 2030.

Cities in Bangladesh do not generally have an efficient public transport system. But the status quo might change with the inauguration of the mass rapid transit projects and the convergence of the myriad bus routes into a franchise system in Dhaka city. An improvement in the public transport system can reduce the need for cars among the more environmentally-conscious youth, leading to lower than anticipated demand in Dhaka and other metropolitan cities.

Worsening air pollution is a major concern in Bangladesh, with vehicle emissions contributing to Dhaka becoming one of the most polluted cities in the world. The automobile policy addresses the need to retire and scrap vehicles operating beyond a certain lifetime. But currently, Bangladesh does not have any cap on vehicle age, which paves the way for the used cars (secondary) market to flourish. This practice essentially keeps cars circulating within the market for decades and obstructs the growth of the primary car market, while the exorbitantly high new car prices act as a disincentive to upgrade.

Bangladeshi roads are generally narrow, often gridlocked and of poor quality, but this is not thought to have adversely impacted the car purchase decision for most buyers. Indeed, the poor-quality roads are a key reason why consumers opt for SUVs. With the government undertaking a vast number of road infrastructure development projects, the adoption of cars is expected to increase in the future, especially within smaller divisional and regional. Setting up EV-friendly infrastructure such as a national network of charging points is also going to be critical in driving up the adoption of EVs.

Given the many tailwinds, Larive Group partner LightCastle Partners takes a cautiously optimistic outlook on the future of the Bangladesh automobile industry. Executed correctly, the automobile industry can mirror the policy success of the local two-wheelers industry, which has led to investments from multiple household brands into local vehicle production and culminated in the development of a local components industry.

Keen to learn more about the automotive industry and EV developments in Bangladesh? Larive International and its Dhaka-based Larive Group partner LightCastle Partners are specialized in developing and implementing market entry and growth strategies. Reach out to one of our colleagues! 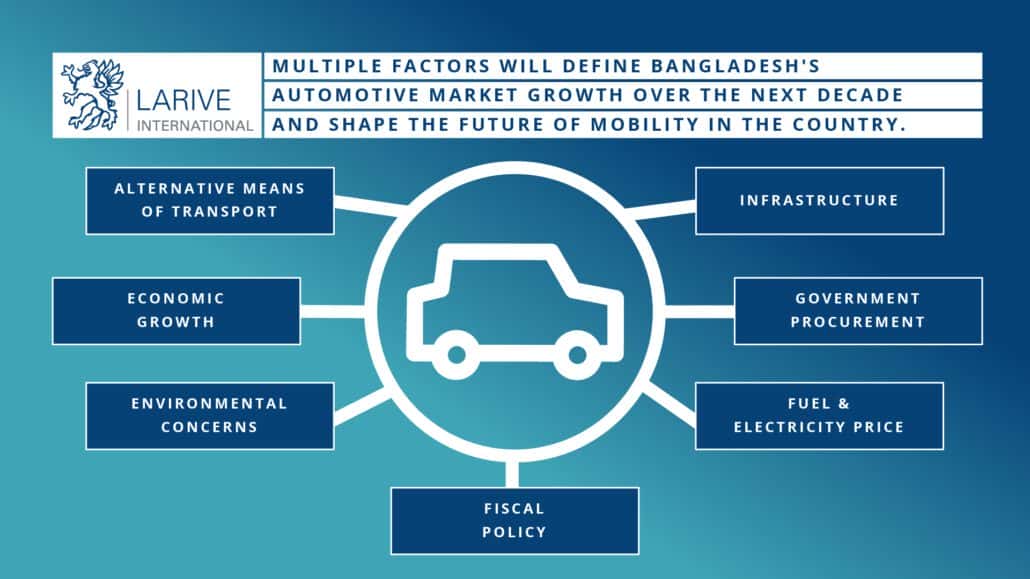 Given the many tailwinds, Larive Group partner LightCastle Partners takes a cautiously optimistic outlook on the future of the Bangladesh automobile industry.

Developments in the Nigerian Automobile Industry