Due to a strong growth in population, urbanization, increased wealth and changing eating patterns, demand for protein-rich, safe and sustainable food increases. These factors put enormous pressure on farmers as arable land and resources are limited. Fish is a very efficient form of animal protein in terms of feed, water usage and emission. Sustainable production of fish could therefore be an interesting solution for the East African market. Creating opportunities for both local and foreign investors. 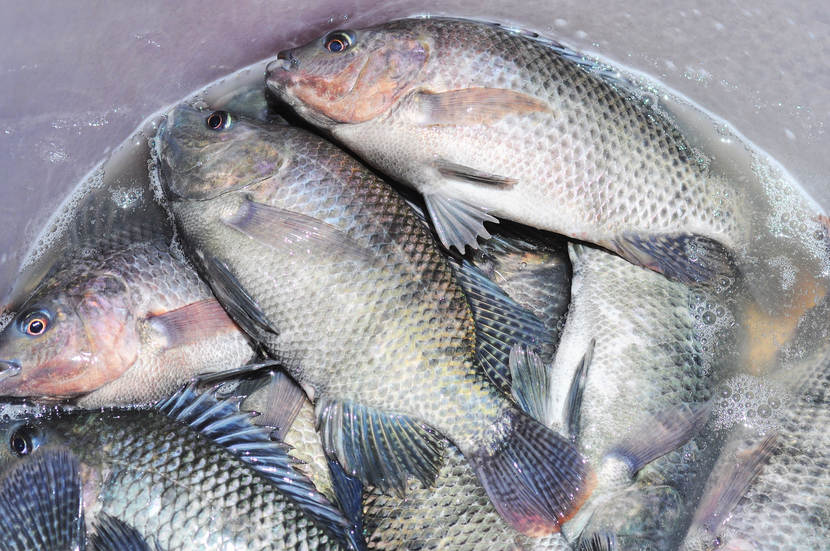 Traditional forms of food production as agriculture and livestock demand a lot of time and resources. Most agricultural produce takes one full calendar year before harvesting, making it time inefficient. Therefore a new source of food has to be sought, one with a higher yield. Aquaculture provides such a chance because of its time and space efficiency. The embassy supports two projects on aquaculture in Kenya and Tanzania, KMAP  which focuses on pond farming and FoodTechAfrica using Recirculating Aquaculture System (RAS) technology. These projects contribute to the Sustainable Development Goals on reducing hunger, responsible consumption and climate action. On top of that the programs contribute to higher levels of economic productivity through diversification, technological upgrading and innovation.

In 2011 a study was done on fish consumption and the potential for aquaculture activities in Kenya.

The study, commissioned by the Netherlands Embassy, showed two important findings. First of all, there is a potential market in Kenya, but interventions are required across the entire value chain for a sustainable growth of the sector. Secondly, the scope of the fish production chain should not only be on producing fish but also on secondary aspects such as better access to quality inputs in the form of quality feed and seed. The availability of affordable high quality feed in Kenya is very limited and needs improvement for the aquaculture sector to grow.

Traditionally fish has been most popular amongst Kenyans around the lake and coastal regions. However, there is an increase in awareness of the nutritional value of fish as the healthy white protein which can partly be attributed to the “Eat fish for a better Life” campaign, which aired on TV and radio stations across the country. 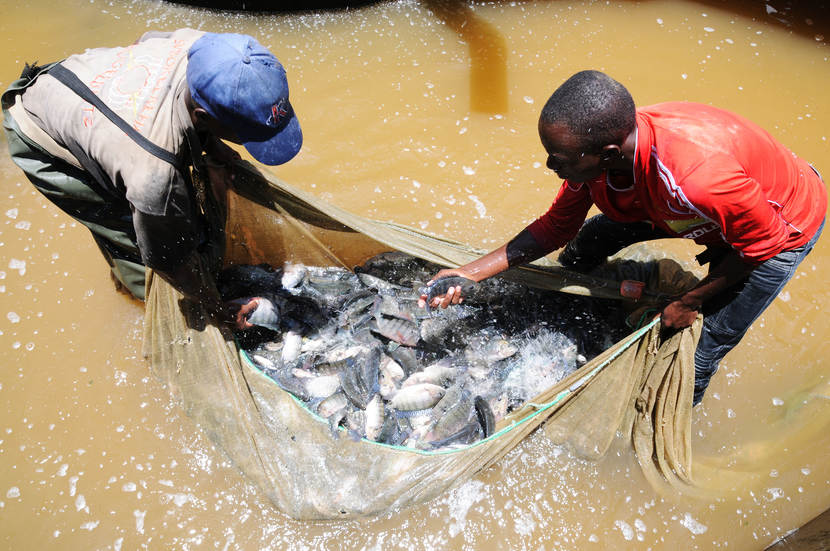 The potential for RAS Technology

in 2011 a consortium of 14 companies was established under the name FoodTechAfrica (FTA), to improve shortcomings in the secotr and create a solid fish market. A tailor-made version of Recirculating Aquaculture System (RAS) fitting East African conditions was developed, one where fish are grown in a closed system. Theis closed system enabled growers to better monitor water quality and manitain an optimum fish culture environment. The tailort-made system also has teh possibility to adjust temperature and oxygen levels in thee water for optimal growth, while also closely monitoring the PH and CO2 levels in teh culture system. Currently many sectors face difficulties with decreasing availability of fresh water. One of the benefits of RAS is that it uses water very efficiently.

Compared to a traditional open pond, the concentration of fish is much higher in RAS. This requires close monitoring of oxygen levels and toxic elements like ammonia. The goal of modern fish farmers is to consistently produce a healthy fast growing fish, deliverable to the market at a competitive cost price. RAS allows for fast and efficient fish growth which enables farmers to grow larger sized fish and deliver these to market throughout the year. This space-efficient, land-based farming method allows for the flexibility to produce right next to the consumer market, resulting in a better price for fish.

With the rapidly growing demand for fish and the recent pledge by the government of Kenya to restrict import of fish and thus help boost local productivity, there is an even bigger opportunity in the aquaculture sector. A convincing business case for fish production in Kenya can be made with relative ease, however, fish production is not the only entry in the market. An increase in local production also entails a growing demand for quality inputs, like quality fingerlings. There is a need for more hatcheries nationwide to produce this input. Establishing hatcheries is potentially an excellent business opportunity for the private sector. 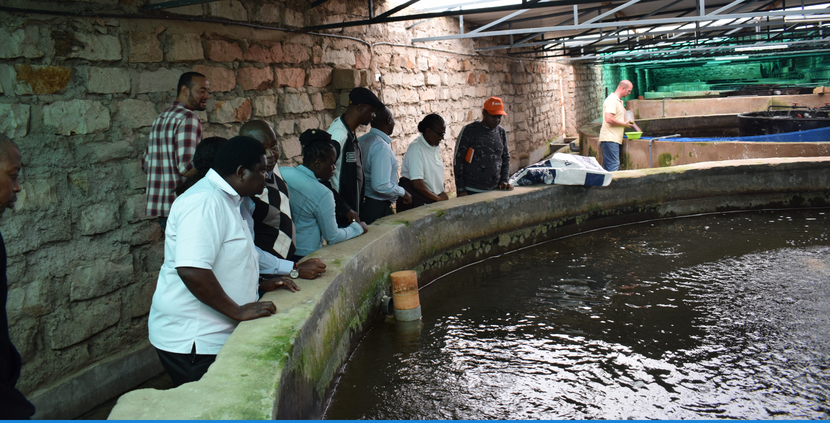 In 2015 a pilot was held near Machakos at the Kamuthanga farm. The initial idea was to produce tilapia at Kamuthanga and sell it in Nairobi. However, during the pilot it became clear that the complete production could be absorbed by the local market in nearby town Machakos. This shows that even in a city with historically low fish consumption there is a demand for local grown tilapia. Currently the Machakos fish farm is the biggest of its kind in East Africa and aims to produce 1000 tonnes in an ‘Aquahub model’ with small scale satellite farms ran by small holder farmers utilizing upgraded pond systems and small scale RAS farms.

Even though there is a large demand local fishers are often outcompeted by cheap fish imported from China. After lobbying from various parties involved in the fishing sector, President Kenyatta has implemented a ban on import of Chinese fish which will come into effect on January 1st 2019 (See the attached document with the official communication).

Another challenge is fish feed which can take a share of up to 70% of the total production cost, making feed by far the highest cost for farmers. To deal with a lack of affordable high quality fish feed, FoodTechAfrica decided to collaborate with expert partners, such as Skreting, Almex, Nutreco, Ottevanger and Unga, to establish a fully extruded floating fish feed Factory together.

“Sometimes you realize that you need to increase the scope of your project to be successful” says Wouter van der Vliet, director Larive.

With the experience of Unga, the technology of Ottevanger, and Nutreco’s in depth knowledge on feed formulation, a first step has been made to produce high quality affordable fish feed for Kenya and even export. However, the high import costs of some of the ingredients still form a challenge to accomplish this mission.

With the initiative that started 7 years ago as FoodTechAfrica, a fully operational factory has been set up, a successful pilot has been held, and a market for fish has been found in an unexpected place. RAS clearly has potential, but one of the biggest challenges is the high investment threshold. Most small scale farmers are not able to cover these costs. Purchasing a tank is expensive, the bio filtration is an even bigger investment. Moreover, the system requires a high level of knowledge, farmers need to know all the ins and outs, both on fish farming and also have an understanding on maintaining the filtration system.

Adjust your business model to the local context

To deal with the high investment challenge FTA has developed a new model called the Aquahub. In the Aquahub model commercial farmers are needed to produce the sheer volumes required and small scale farmers will contribute to reach production targets nationwide. This means that small scale farmers can benefit in the slip stream of the commercial farmers with a bigger investment power. This reformulation of the business model shows how companies can respond to the local context and use the way the sector is organized to reach their ambition.

Moreover, limited knowledge of most fish farmers is another obstacle in the successful implementation of profitable aquaculture. FoodTechAfrica tackles this at Kamuthanga Fish Farm, their first project partner. 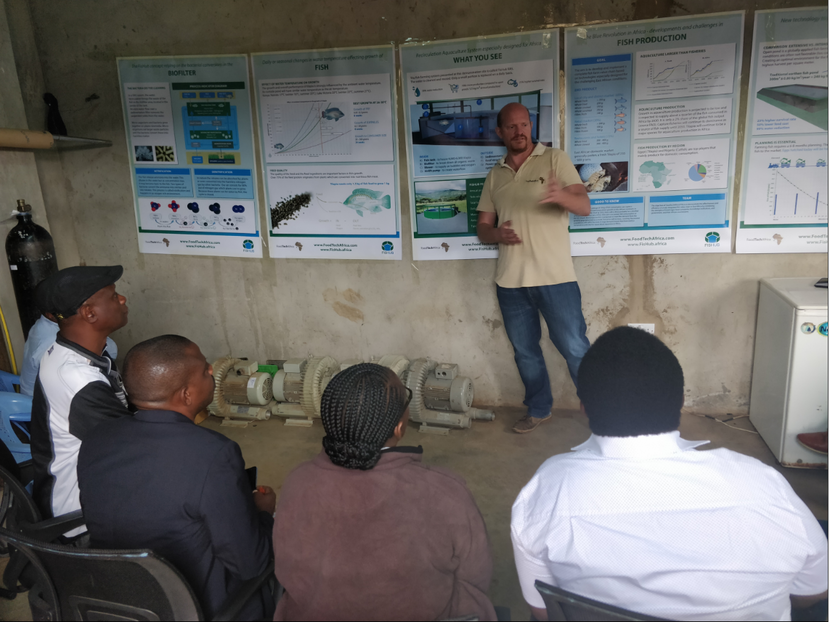 Kamuthanga Fish Farm which currently has 28 fish tanks and is on its way to reach its potential production capacity which stands at 200 tonnes. Moreover, the farm now produces fingerlings for both its own production as well as for small scale farmers in the Machakos area. It thereby fulfils a role as the Nucleus farm within the Aquahub model, as a distribution point for fish feed and a training location for (prospective) fish farmers. The trainings are on a wide variety of subjects, such as on RAS technology and implementation, overall farm management, record keeping, feeding regime, and overall best practices in fish farming.

The efforts of FoodTechAfrica and KMAP show that cooperation with local small scale farmers and external investors can form an ideal combination for a next step in achieving the Sustainable Development Goals and the 2015 Paris agreement.

Aquaculture offers many promising opportunities for the Dutch Private Sector, not only in Kenya but also in Tanzania. In 2018 an Impact Cluster has started in Tanzania to stimulate aquaculture in Tanzania and inspire entrepreneurial minds to get involved in aquaculture. The motive of the Impact Cluster is to provide tailored equipment, quality inputs, in-depth training and support services to entrepreneurs. So that we can drive the blue revolution together. 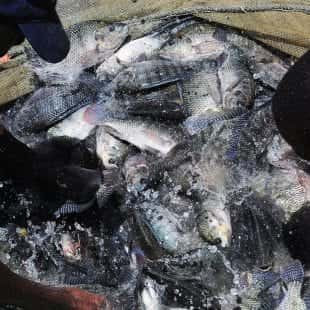