An introduction to Bangladesh

Bangladesh ranks within the top-10 of the most populous countries worldwide. In perspective, the country inhabits 10 times the number of Dutch residents, while Bangladesh’s surface is 3.5 times the surface of the Netherlands. The capital Dhaka (including its suburban areas and neighbours) is estimated to host over 20 MN inhabitants (>12% of the country’s population) This dense population also has its advantages in terms of economies of scale, easing transportation and distribution.

The country has been among the fastest-growing economies in Asia during the past decade and its GDP grew with 7.9% in 2018, reaching EUR 245.5 BN (reference: Netherlands EUR 772.7 BN). The GDP growth rate is expected to remain roughly at par with the current rate (7-8% per year) until 2025. Income per capita is expected to increase, thereby further boosting consumption. The growing and more prosperous middle and affluent consumers (MAC) offers opportunities for economic growth and will likely be the key target for the commercial industry in the next decade.

The Bangladesh Development Authority (BIDA) has been exerting considerable efforts to attract foreign investment in the country. These include amongst others tax exemption for certain sectors, absence of import duties for export-oriented sectors and flexible capital repatriation policies. As a result, the country has succeeded in attracting more foreign direct investment (FDI), reaching EUR 3.2 BN in 2018, growing with 68% relative to 2017.1 Advantages of investing in Bangladesh include:

The Bangladesh government has further established bilateral trade agreements and investment treaties to prevent double taxation, including with the Netherlands (Double Taxation Agreement since 1995). As Bangladesh is regarded as a “least developed country”, the country enjoys trade preferences, causing market access to be more preferential. This will likely be a major contributing factor to the acceleration of the economy.2

The elephant in the room

However, the global economy is going through turbulent times and the Bangladeshi economy is no exception: the pandemic induced slowdown shows on all economic and business performance indicators. The World Bank’s revised economic growth projections for FY 2019-20 peg back GDP growth to 1.8% compared to the pre-Covid assessment of 8.1% – a staggering blow.

The result was, sadly, inevitable. More so because Bangladesh’s twin growth engines – apparel and remittances – have suffered from a multitude of demand- and supply-side shocks. The pandemic led lock-down has led to either a flurry of order cancellations or deferment from international buyers, while the prolonged global economic recession will surely inflict further blow to apparel’s demand for the upcoming year. Although remittances have risen to a record USD 18 BN in the current fiscal year, thanks to timely fiscal incentives, remittance inflow from Bangladeshi migrant workers are expected to drop sharply in 2020-21 due to large scale redundancies and exodus of migrant workers from their host countries.

Sectors catering to the domestic economy have also suffered from declining sales and disruptions in the supply chain. Real Estate, Construction, Tourism & Hospitality have all witnessed steep fall in revenue, which is unlikely to recover until the pandemic moves beyond the horizon. FMCG has experienced marginal decline in demand but is expected to rebound quickly as the economy rebounds.3

Strength and opportunity through Partnership

“We believe the Bangladesh opportunity is exciting – led by your goals and accomplishments. And to that end, we are here to support and collaborate.” Zahedul Amin, Director Consulting, LightCastle Partners. 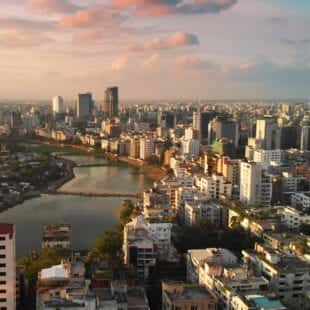 “We believe the Bangladesh opportunity is exciting – led by your goals and accomplishments. And to that end, we are here to support and collaborate.”