The Government of Karnataka and 2030 Water Resources Group (WRG), part of IFC, launched the Karnataka Multi-Stakeholder Platform for water which is one of the largest Drip Irrigation Project: Ramthal Drip to Market Agro Corridor (DMAC).

Water is increasingly becoming a scarce commodity, as per WRG hydro-economic analyses there would be a big increase in water demand across sectors in Karnataka by 2030. Massive improvements are needed in agricultural productivity and efficient irrigation. Population growth and urbanization are projected to widen the urban water demand-supply gap in Karnataka from 24% (2011) to 58% (2030), with the Greater Bangalore region accounting for two-thirds of the additional urban water demand in 2030 (2030 WRG, 2014).

Larive International and their Indian partner Sannam S4 supported a workshop along with 2030 WRG’s (World Bank subsidiary) last May 2017 in Bengaluru. State Government officials from the Department of Agriculture, Horticulture and Water were present and addressed the delegates on the project and way forward. The workshop witnessed a grand success with the presence of around 100 visitors from Water Users Associations, farmers associations, private sector players, major food processing companies of India, aggregators, exporters, suppliers of agriculture products and Ministry of Agriculture & Horticulture.

Overwhelmed by the positive response of the Ramthal DMAC Workshop, the Government has taken a step forward in actualizing the concept which was once designed. Following the workshop, Larive and Sannam S4 along with the Government of Karnataka have organised a field visit for private sector companies (aggregators, exports, food processing companies, retailers and suppliers of agro products) to the Ramthal area in Hungund, wherein several aspects with relation to signing a MoU between the private sector players and farmers, way ahead were discussed in subsequent forums.

“It is important to adopt long-term perspectives to water resources management, address water and water-related issues and solve the issues with innovative ideas and techniques. For this, I believe the Netherlands has a lot to offer and solutions can be brought via the golden triangle (public-, private sector and knowledge institutes). Through Public-Private Partnership models with international and local players, we can jointly tackle the challenges. “ Davinia Lamme, Managing partner, Larive International.

To learn more about what we do with Public Private Partnerships in India and how can we help you, please feel free to connect with us: Davinia.lamme@larive.com 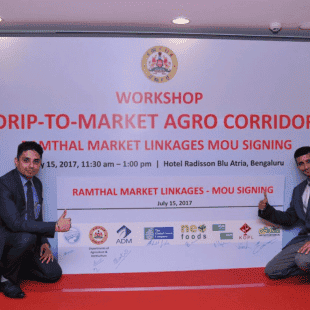